For the final round of the 2021 Selco.ie Formula Vee championship the drivers headed north of the border one last time. The national championship had been wrapped up at the previous round by Anthony Cross and the Motorsport.ie 'Star of Tomorrow' championship by Owen Kelly but the VW Spares title was still up for grabs between Jordan Kelly and Tim Murray. Both men had wins overall in the class this year and also bad luck with mechanical problems and accidents hence why whoever finished in front at the final race would take the title.

By this time of the season the wooly hats, scarfs and umbrellas are brought back out and especially at the county Down circuit where the sea is only a stone throws away. Not this year, as the Indian summer hung on to make conditions for drivers and spectators sublime. Testing and qualifying took place the previous day with Cross carrying his good form over from Mondello to take pole but by only 0.97 of a second from Jordan Kelly who always goes well in Kirkistown. Murray however kept the pressure on by taking third spot on the grid with another great qualifying by Gary Newsome who would start from fourth. 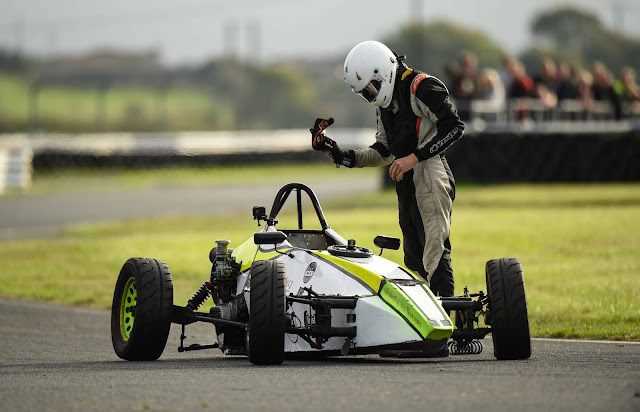 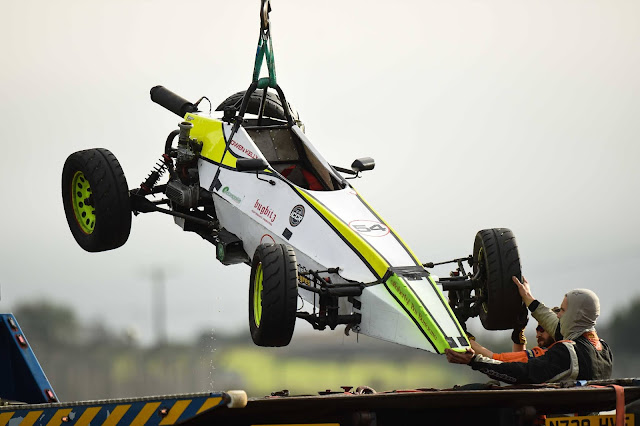 A fantastic grid of twenty three cars took to the grid for the final round, a sign that the class has built a solid core of drivers for a full season. As the lights went out Cross spun his wheels and gave the upper hand to Kelly as they left the line. Murray made an even better start to slot into second with Newsome following suit into third as they all rounded Debtor's Dip for the first time. With plumes of smoke at turn two after several lock ups it was expected there would be waved flags but they all emerged in single file with the Kelly in the lead. He gained five cars lengths after exiting the chicane alone such was the speed he was able to carry through.

This would help him no end down the long back straight towards the hairpin. Dan Polley had now got passed Cross and Newsome to hang on the tail end of Murray. By the start of lap three Kelly was on his own with a gap to both Murray and Polley who had also broken away from the pack behind. Behind this at the hairpin David O'Loughlin who spun was unfortunately collected by Owen Kelly who sadly broke the left rear suspension which left his car stranded in the middle of the circuit. There was no option but to bring out the red flags.

On the restart Cross didn't make the same mistake twice and got the jump on Kelly and lead the field round Debtor's with Murray in second who also made a great start. With Kelly in the pack Murray took his opportunity at the hairpin to take the lead at the end of lap one. Kelly also got by on the outside of Debtor's knowing he could not let Murray make a break for it. the battle was on and winner would take the prize. For the following two laps Kelly tried his best to outbrake Murray at the hairpin. Both men side by side all the way down on the approach. Murray held firm and his inside line and remained in the lead for now. The next time round he got better drive on to the main straight as also did the new third place man Dan Polley, as the first three went side by side going towards the fast left hand kink. Anthony Cross still held fourth and was also ready to pounce.

Kelly took the lead but by the end of the back straight Murray again got by on the inside line at the hairpin. By the second corner the positions reversed again, this was turning into a classic Formula Vee race. Nothing between the first four cars and all racing clean with not one unfair move pulled by anyone. It was anyones, both Murray and Kelly knew whoever finished ahead of the other they would be champion. Again it was a Senna/Mansell esque run to the hairpin as Murray made use of the tow exiting the chicane to pull alongside Kelly. It worked and he again lead on to the main straight but only briefly as Kelly used the inside line to retake the lead. Polley held off Cross to hold third.

A lap later they all got a great run through the chicane leaving another three car side by side battle on the run down to the final corner. The margin of error getting smaller and smaller each time. With two laps to go Polley moved into second giving Kelly a slight breather in the lead. He knew he had to get his head down on this lap to make a gap to prevent a last lap scramble. This he did and his run through the chicane alone gained him the time he needed. Murray got by Polley at turn two but try as he might he didn't have the laps left to get close enough to challenge Kelly. Kelly took the chequered flag and with it the VW Spares championship. A deserved victor and champion who proved his pace yet again this year and if weren't for those DNF's he could have brought the national championship to the final round aswell.

" It's nice to get the win today and the B championship, It was a hard battle with Tim and Dan and it was close for most of the race. I just happened to get a gap with a couple of laps to go."