Mondello Park was the host of the final round of the Selco.ie Formula Vee Championship this weekend. The county Kildare circuit held the season opener back in July and nobody knew at the time if they would be back there again in these strange times due to the Covid-19 pandemic. Credit must be given to the Mondello Park staff and race officials as their hard work enabled racing to go ahead this year. It was such a shame spectators were not allowed to see the on track action and fantastic races throughout the season of which there were plenty. Hopefully by the time the new season comes round next year things will have improved greatly by then and the public can go back and enjoy the entertainment put on by the Formula Vee drivers.
Going into the final round the championship, two drivers, both Dubliners and both driving Sheane built cars were left to fight it out for glory. One going for his first and the other out to make it three in a row. Current champion Anthony cross had a narrow gap of two points over Gavin Buckley, but with one dropped round to consider he only had to finish in seventh place if Buckley won. This gave Cross the advantage but you never know in motor racing as anything could happen.
That said with two titles in succession under his belt Cross had the experience behind him to remain calm when the situation called for it. Buckley was in new uncharted waters and even though he was his usual laid back self ahead of qualifying there was a slight edge lurking in the background. Why not? It was his first chance to take a championship so it was to be expected. Cross, even with his experience was also a little on edge ahead of qualifying, which is most important on the tight and twisty national layout at Mondello. Then there was also the young guns of Jack Byrne, Jordan Kelly and Philip Sheane who all went well at the previous meeting in Mondello to contend with.
Speaking firstly to Cross I asked him if he had a plan of attack for the race.
" If Gavin wins I have to finish at least 7th to take the championship. I also don't want to get caught up in the pack and get drawn into a battle and lose concentration and end up going off. So it's going to be a bit of a balancing act."
This proved to be the case as Jack Byrne continued his impressive form in the last three race meetings by taking pole position by 0.145 seconds ahead of Buckley who took second but most important for him a position ahead of title rival Cross who lined up in third. In fact the session was so tight the top six were covered by 0.6 seconds!
With Buckley starting ahead of his rival I asked him if he all set after his good qualifying? Laughingly he replied, " Yeah all set, which is never for me!" " It's in Anthony's hands as he only has to finish behind me to win the championship. I'm just going out to have a good race and let the championship sort itself out."
As the green lights came on it was Buckley who got the jump over Byrne and took the lead going into turn one. He was under pressure though as Byrne was right on his tail and eager to get by as he had a trail behind him of Jordan Kelly, Anthony Cross, Mark Reade and Philip Sheane. Buckley locking his front wheels going into turn one on lap two was clearly finding it tough under the pressure from Byrne. Byrne made his move and took the lead by the end of the lap with Jordan Kelly following him. Unlike the last meeting, try as he might Byrne was not going to break away from the field. He was joined by Kelly in a one of the best and closest races all year.
Cross however didn't make a great start and found himself battling with Phillip Sheane and then Mark Reade. The safety car had to be deployed to retrieve the stricken car of Tim Murray who got stuck in the gravel after spinning at the final corner. Byrne made the best of the restart and defended by taking the usual inside lines, but Kelly wasn't afraid to try it the long way round almost pulling it off at turn one on a couple occasions. He looked to have made a move stick as they came back in from the country and into paddock bend but Byrne held firm on the outside and made a great move holding the lead as they rounded the penultimate right hander to keep his lead.
Behind this battle Mark Reade made a mistake at turn one while lying in fourth and ended up in the gravel but did rejoin dropping to ninth. He made a great recovery though eventually making his way back up to fifth by the end of the race. Philip Sheane also made progress throughout the race as other went off and battling with Cross for half the race and then getting past Buckley with three laps to go. Up front the pressure on the leader did not ease but try as he might Kelly just could not get through and Byrne made it two wins in a row and finishing the season very strongly. The Wicklow man has been strong all year but had some bad luck along the way, but in recent weeks his performances have made him one of the favourites for next season. 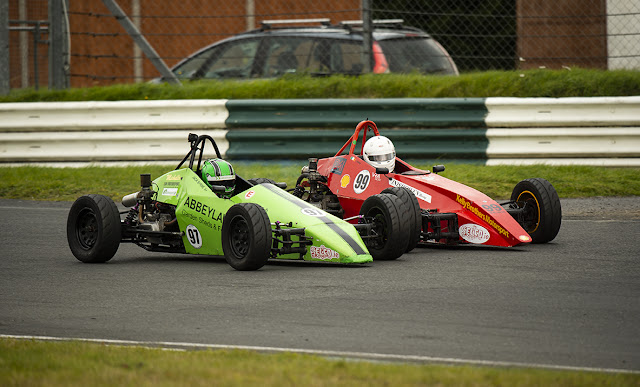 In the end though Anthony Cross did what he had to do and stayed out of trouble and claimed his third title in a row. He didn't have it his own way and didn't win every race, but when he didn't win he was on the podium gaining valuable points for the championship. His car preparation is second to none and it shows throughout the year as he never suffered any mechanical failures or problems. The young guns behind him showed great pace and claimed their maiden wins but lacked the consistency over the full season to win the championship. I caught up Cross to congratulate him and see what it meant to him to make it three in a row.
" That was the longest fifthteen minutes of my life! I knew what I had to do before I went out and knew I only had to finish seventh if Gavin won, so I had to just keep him in sight. Then when I was on the line I thought to myself feck it will I just go for it? Then the lights went green so I said I'd go for it, but then it got fairly fraught up front and I had Philip Sheane hassling me from behind. So I decided I didn't need to be involved in this, so I had a moment to think and let them off and keep out of trouble. It started to rain also which played on my mind but it probably wasn't as bad as I thought and made me just play it safe and bring it home to the flag."
So after being the man to beat for the last three seasons and doing the double twice in two years by also winning the Emerson Fittipaldi trophy, is the motivation still there to try and make it four in a row?
" Last year I was thinking that this year would be my last year in Formula Vee and then with the year that's in it I think we were robbed a bit of a season with having less races so I think I'll come back next year and have a good crack at it. I have to thank my dad Fred who is the reason the car runs so well and never gives us problems. Also thanks has to go to Selco Hygiene Supplies for sponsoring the class again and providing masks and sanitisers to all the drivers and the committee for getting the championship going as it looked like we wouldn't have any racing at the start of the year."
There was another championship decided that of the VW Spares 'B' Championship which was wrapped up by Philip Sheane. A deserved title as Sheane has come on strong from last season as a rookie to win his first national race and to run up front several times during the year. Some mechanical problems cost him a chance to run for the overall title but as he moves on to Formula Sheane next year he certainly should be up at the front in that class also.
Hopefully it will back to normal pre Covid-19 by the time the new season kicks off next year. I think everyone has had their fill of it at this stage and hopefully spectators can come back in a get to watch more great battles all year long. It has been a great season even it was shortened to eight rounds. There were five new winners in the class this year, a great increase in numbers taking to the grid and plenty of newcomers with more to come. So here is to the class of 2020 a fantastic season for the lucky few who got to witness it!
Results:
Selco.ie Formula Vee National Championship
1st Jack Byrne
2nd Jordan Kelly
3rd Philip Sheane
VW Spares 'B' Championship
1st Philip Sheane
2nd Mark Reade
3rd JB Farrell
Motorsport.ie 'Star of Tomorrow' Championship
1st Jordan Kelly
2nd Donal Downey
3rd Michael Killian
Posted by Barry Cregg