At long last the tedious wait was finally over for competitors as the 2020 Selco.ie Formula Vee championships got underway at Mondello Park yesterday. A very healthy grid of 24 cars lined up for the season opener, a much needed boost to the class which saw numbers begin to dwindle last season. Ten newcomers to the grid would make the 'Star of Tomorrow' championship one of the most openly contested classes on the tracks this year.
One of these newcomers was Ronan Waters from Wexford. Who along with his team of mechanics, although only one was left to do the work while the rest looked on, was eager to get out on track.
" Im looking forward to it and should be a bit of craic and sure we'll see how it goes."
It was great to see the group of men get together in helping a young driver in his first race and showcase what Formula Vee is all about.
Another two of the newcomers were Colm O'Loughlen and Michael O'Callaghan. Both natives of Kerry it was a life's ambition for the two to go motor racing and now the opportunity was there to do it said Colm. " I never raced anything before but I have always been into cars and only now have I had a chance to get into doing it. I'm looking forward to it and it will be fun." Michael agreed, " I'm the same the chance came up to do it and I said I might aswell. Although after the first test session I was getting dizzy" he laughed.
With the weather forecast not looking great for the afternoon, qualifying would be crucial in the morning. Thankfully the rain stayed away for qualifying and just like last season Anthony Cross in his Sheane began to top the timesheets. He would stay there until the end as for most of the session he was four tenths up on the field. Then in the dying moments Gavin Buckley got to within a tenth of second to Cross. Time ran out to go better but it was a good showing from Buckley who put in some good drives last year. Phillip Sheane also had a good qualifying and was up to second at one point but dropped to third. Apart from Cross the main favourites in Jack Byrne and Dan Polley who usually qualify in the top four had a bad session ending up in eighth and eleventh respectively. In fact it ended up a very close session with the first three cover by 0.135 of a second.The fastest newcomer was Michael O'Callaghan in a very good 13th place.
Thankfully the weather gods looked down on Mondello Park and kept the rain away for the afternoon. Where the two metre distance rule applied everywhere else in the county Kildare venue, it certainly did not once the lights went out to start race one. Buckley got the jump over Cross off the line but Cross held the inside line to lead him and the field around turn one. It didn't take Cross long to get into his stride and began to open a gap over Buckley who held his own over Tim Murray who made a great start to get himself into third. Cross started to open a gap on the field putting in consistent times to build his lead over the following three cars who now were firmly in the grips of a hard battle. Sheane overtook Murray going into the final corner and then lost his nose cone trying to get it back going into turn one. This gave Buckley room to breath for a while and also Trevor Delaney, Mark Reade and Dan Polley to get closer and join in the battle. Polley got ahead of Reade and started to show his form moving on to the back of Delaney. As this was going on the leader lost the gap he had built up and it became an eight car train for the lead. Coming out of turn three Murray and Sheane collided with murray coming off worse dropping down to 17th and Sheane down to 8th. This of course let the front two clear but also allowed Polley to get a move of Delaney to put him into third place. As the race began to come to a close Cross upped his pace to open up his lead again over Buckley as Polley chased in third. The race for fourth was between the three cars of Delaney, Reade and Byrne. It was Reade who won this battle to finish in fourth ahead of Byrne and Delaney. Up front it was Cross who continued from where he left off last year by taking the win from Buckley and Polley.
Speaking with the winner after the race he was glad to bag his first win " I missed a gear at paddock bend and dropped back towards Gavin but no real problems other than that. The track was very slick but im happy to get my first win of the year."
For race two it was Cross on pole with Philip Sheane lined up beside him this time. Sheane made the much better start off the line and headed the field into turn one. his lead was short lived as a number of cars came together in turn one which brought out the red flags. On the restart it was again Sheane who got the better start and lead going towards turn one but an accident just after the bridge between Robert Fleming, Dan Polley and Trevor Delaney brought out the red flags again. Thankfully nobody was hurt and the rescue services and marshals were on the scene instantly.

The third time of asking was much less frantic as Cross made the better start and his best all day to get into the lead before turn one with Sheane in second and Buckley in third. Tim Murray and Jack Byrne battled for fourth until Mechanical problems but Byrne out after only a handful of laps. The field began to stretch out bar the front two, where a closely fought battle was brewing up nicely.
Lap after lap Sheane harassed and pressured Cross trying to pass on the outside into turns one and three several time to no avail. With Cross trying to hold off and take win number two of the day and Sheane trying to take his first ever Formula Vee win which he so nearly came to at the end of last year, it always had the chance of ending badly. That is what happened on the penultimate lap on the exit of the final corner. As Sheane got a better drive on the inside Cross came across to take his normal line but in doing so got collected by Sheane with both cars spinning off. This gave the lead to Buckley who must have thought Christmas had come early, and put Tim Murray up to third. Luckily for Cross he spun round in the right direction and got going enough to stay in second place. With a lap to go he had no time to try and regain the lead. Buckley remained calm to take his first Formula Vee win from Cross and Murray. 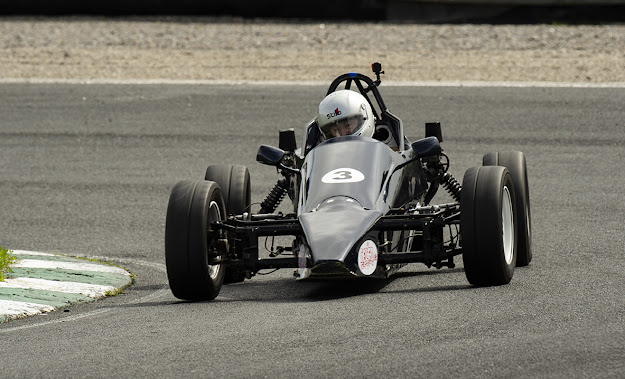 So an action packed weekend in Formula Vee has drawn to a close and after such a long wait for it to come round it certainly flew by. Sadly not all would be going home happy with the way their races went but some certainly will least of all Gavin Buckley who took his maiden win. Anthony Cross still remains the man to beat though but the pack are catching up. It was great to see a grid in a healthy state again and hopefully it continues for the rest of the year. Spare a thought for David Sheane the man who brought Formula Vee to Ireland and has made so many cars for drivers down through the years at this time and hopefully he makes a recovery soon and we will see him in the paddock again.
Results Race 1:
Selco.ie 'A' Championship
1st     Anthony Cross
2nd   Gavin Buckley
3rd    Dan Polley
VW Spares 'B' Championship
1st    Mark Reade
2nd   Philip Sheane
3rd    Ger Byrne
Motorsport.ie Star of Tomorrow 'C' Championship
1st    Ronan Waters
2nd   Michael Killian
3rd    James Sheppard
Results Race 2:
Selco.ie 'A' Championship
1st     Gavin Buckley
2nd    Anthony Cross
3rd    Tim Murray
VW Spares 'B' Championship
1st    Tim Murray
2nd   Mark Reade
3rd    Philip Sheane
Star of Tomorrow 'C' Championship
1st    Jordan Kelly
2nd   Karl O'Sullivan
3rd    Michael Killian
Posted by Barry Cregg