After taking victory in round seven of the Selco.ie Formula Vee championship Anthony Cross showed how tactics and patience are key to winning at Kirkistown Racing Circuit. For round eight it was going to be more of the same but adding to the pressure was that the winner would also collect the prestigious Holmpatrick trophy. The pressure was somewhat off Cross in a way as he already had a maximum points haul and others missed out on it but he wouldn't be slowing anytime soonas it was a trophy that has eluded him for a long time. Last years winner Jack Byrne was out of contention barring a miracle as he again had to start from the back of the grid. One thing for sure though it was going to be between anyone in the top six.

Round seven proved that and several drivers wanted to make up from missed chances all year. Cross lined up on pole with Buckley, Kelly and Polley behind him. As the lights went out Cross seemed to get the jump but Buckley had an even better start and led the field into the flat out left hand kink 'Debtor's Dip'. Cross found himself back to third by turn three as Dan Polley was looking like a man on a mission as he made short work of his fellow Dubliner. By the start of lap two he was in the lead his car looking very fast compared to the race at the same venue last year. That said the following five cars behind him were on the pace also. This six car train had already broke away from the rest of the field. The winner would come from here, who it would be at this stage was impossible to call.
Tim Murray had now got into third and was looking to follow his similarly prepared LOH Motorsport car into second. However Buckley was having other ideas and moved into the lead at turn two. Cross had now found himself down in fifth with work to do. Gary Newsome was having a great run in sixth but lack of competitive action saw him unable to progress further but by no means was he out of it. Again the lead changed a lap later as Polley took the lead going into turn one. Buckley defended his spot and remained in second with Murray try everything to get by. The pace was so close that none of the leading six cars could make a break from each other. It also has to be said the driving standards were very fair and clean a credit to the drivers who showed that racing while close can be done cleanly.
The Leinster trophy meeting had brought the crowd to Kirkistown and they were being very well entertained in this one. Polley again took the lead along the start/finish straight but Jordan Kelly pulled off a fantastic move by taking Murray and Cross on the inside of 'Debtor's Dip' to move into third. No room for error and not much given either but it was shaping up to be one that was going to be talked about in the paddock for a while. A couple of laps later Polley and Buckley had a two car length gap over Murray in third, swapping the lead every lap though prevented the gap growing more. This may have cost them both a chance for the win in the end as if they worked together they may have broken clear enough for the others to catch. While going into the hairpin Murray got hit by Kelly which ended the Meath mans race as a rear arm had snapped. It didn't cost Kelly much time though as he remained in the front group. Newsome's challenged had faded as he dropped back but held fifth place.

While Buckley was great at defending into the hairpin Polley was even better on the exit and every lap he retook the lead around the outside line and down the straight. It worked like a charm, and he held his lead until lap nine but masterful tactician Cross had also got by Buckley and now made the same move on Polley that had worked for him all race long. He was in the lead and now it was up to the others to battle it out behind. First to fall was Kelly who spun off under braking going into turn three. From six cars after the opening couple of laps it was down to three but all still as close and still for anyone to take. Now they began to catch the tail enders a recurring issue in recent rounds. Cross got by them quickly and gave himself some breathing room. A lap later though Buckley was by yet again and into the lead. He was really up for this one and led with three laps to go. Had he gone too early though?

Polley again had got drive down the straight and closed the gap to the front two but over shot slightly at turn two and this cost him the chance of a win. Still though a great drive from him and a good return to form. Now it was down to two with a lap to decide the race. Cross again pulled of the move he had done a few laps earlier and took the lead on the inside of Buckley going into 'Debtor's Dip' and held his line for the following right hander. Now it was Buckley who had to try and find a way back past. He was unable to repeat Crosses move starting the last lap. Cross had been here many times before and his ability to remain cool in these situations stood to him as he defended without loosing time on the remainder of the lap. Buckley had one one chance left at the hairpin. He tried the long way round but went in to fast and locked up and ran wide. Cross held his line and took the chequered flag to take the Holmpatrick trophy and also making it a double. Buckley held second and Polley third. A fantastic race and display of racecraft from all drivers that were in contention throughout the race. 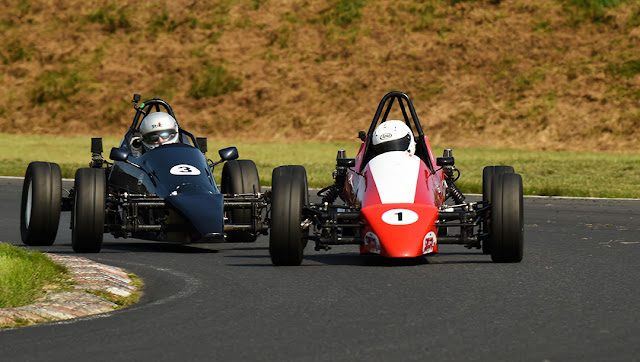 Speaking after the race he was happy but his usual unflustered self. " That was a cracker! I didn't make a great start and got passed by Jordan and Gavin. I think I was down to fifth at one stage. I just tried to stay out of trouble and got by Tim at Debtor's. Then he went out and Jordan so I had a breather before battling with Gavin and Dan. Delighted to win the Holmpatrick trophy as I never won it before."

It wasn't all bad for Kelly who took maximum points in the VW Spares championship. In the Motorsport.ie 'Star of Tomorrow' championship Owen Kelly took the win increasing his lead in the series. Also after many tries and even with a corner to go Colm O'Loughlen finally got his maiden podium with third in the same series. At least there would be one happy Kerryman on saturday.

It is back to Mondello for the next round on the 11th and 12th of September where another trophy will be up for grabs in the Martin Birrane Cup which has been awarded to Formula Vee for their large grids all year.