The weather didn't improve for round eight of the Formula Sheane Championship if anything it got worse. Sadly gearbox problems forced Mark Keenan out of this round but the Meath man will be back out at the next round. Starting from pole position again Philip Sheane had his first wet start behind him in the class so he knew what to do better this time round. The fact the others had to make a better start once again to have any chance of keeping him at bay, was their only hope in stopping a repeat performance of the previous round. This they duly did, Richard Kearney again got the holeshot and lead the field into turn one with Derek Roddy behind and Sheane dropping down to third.

With conditions as wet a slippery as they were, all drivers were in a battle to keep their cars under control and credit to the newcomers who all stayed on track minus the odd spin. Their times will improve but they were thrown in at the deep end between the rain and track conditions due to oil being put down it was no easy task for them. The top three broke clear and despite the spray they put on a show. Kearney was definitely the hare with Roddy and Sheane the hounds. Try as they might Kearney had them covered in the opening laps, given his sponsors logos plenty of exposure as the rear end stepped out every time he asked for power. Roddy in the ironically backed Climote Control car had the worst job as he had to both try and attack and defend. One slip would see Sheane through but on the other hand, a mistake by Kearney and he was through.

Sheane had the better line though the Esses over both men ahead and it gave him better drive up the hill into the final corner where he made his move on Roddy to take second place. Try as he might Roddy had no answer and Sheane defended on the exit and again into turn one until the place was secure. He very nearly got Kearney on the inside into and again out of turn three but the Carlow man had that extra bit of grip and held the lead. It was tight though and he was using all his racecraft and experience to keep the newcomer to the class behind him. Once again Sheane used the outside lines through the Esses gaining huge ground and much more grip on the exit and the result was the move he done on Roddy the previous lap. Now in the lead he was free to get his head down and open up a gap on his two pursuers. This he did with ease. His setup looked better than that Kearney's or Roddy's as he it looked more balanced. That said he was driving very well and clever, using the outside lines where the grip was and it showed as he was able to gain massive amount of ground in the tight infield section alone.

With Sheane out front the race was for second spot. Kearney out to finish higher on the podium than the previous round wasn't giving up holding Roddy behind. It worked for the first half of the race and even opened a small gap to the Louth man. Roddy though had other plans and while he knew the win was gone bar a mistake or mechanical problems on Sheane's car, second place was going to be the next best thing. He also was needed to stem the haul of points that Sheane was taking away from him in the championship. He caught back up to the gearbox of Kearney and by lap six he got by on the entry to the final corner. It was too late to catch Sheane but he still had to keep Kearney at bay and not make a mistake or go off track. 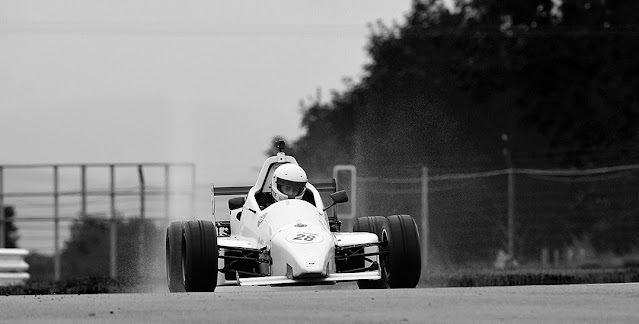 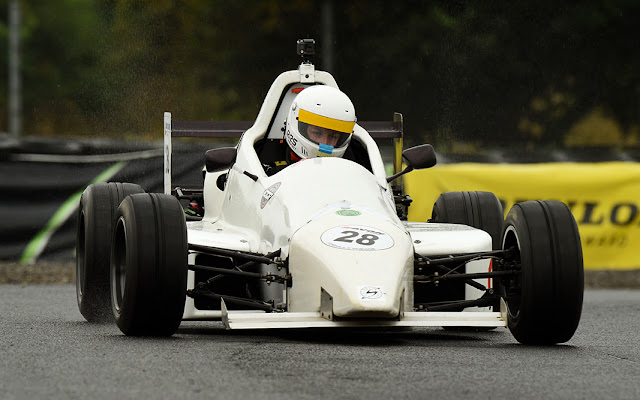 In the Scholarship class Tom Foley kept up his good form and winning streak as he got the better of Richie Adams and Chris Dunne by the end of lap one and held it from there until the chequered flag. Back at the front Sheane reeled off the laps and even set the fastest lap of the race on the last lap to take his first double and to make up for the disappointment of not doing it at Kirkistown the meeting before.