Murray Masters Tricky Conditions To Win Round 5 of the Selco.ie Formula Vee Championship

After a gap of just under a month the Selco.ie Formula Vee championship resumed back again to Mondello Park in county Kildare. Weather conditions could not have been  more contrasting to the previous round as the scorching summer sunshine did not appear for the drivers for this round, as they took to national track layout for their fifth race meeting of the 2021 series.
The time off gave all a chance to get any problems sorted with their cars and it showed with a grid of 26 cars taking to the track albeit in wet and slippery conditions. The wet is a great leveller and can often spring surprises in the timesheets. While the wet can be tricky at the best of times but having to deal with oil also on the track made it a lottery in terms of grip. This would get worse as the day went on. 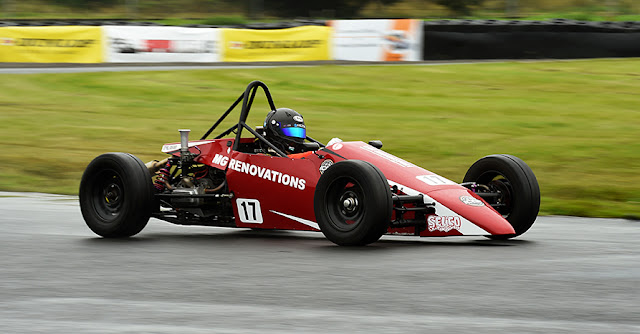 Dan Polley came to this round with a new engine in his car after struggling at the previous round and it worked by putting his Sheane on pole position by some distance of 1.318 seconds. Jack Byrne grabbed seconds position right at the death by 0.059 of a second over Gavin Buckley. With grip at a minimum and a big grid all fighting for it, it was going to be a race where the driver who stayed out of trouble and kept their cool would come out on top.
As the lights went out Polley got the perfect start and lead the field into turn one. Byrne got too much wheelspin and lost ground off the line but still held second going into turn one but a fantastic move on the outside of the corner by Jordan Kelly from fourth place demoted the Wicklow man to third. The front two immediately pulled clear with Kelly all over the back of Polley and both went side by side going towards turn one. Behind them both Gavin Buckley and Trevor Delaney both spun in unisom entering the final corner. Championship leader Anthony Cross clipped Delaney and dropped back and then lost his nosecone a few corners later. Kelly held his outside line and used it again to great effect and passed Polley to take the lead. The outside lines were showing the most grip and those who used them reaped the awards.
Tim Murray made the most of the mistakes of other and moved up to fourth and began to catch Byrne ahead of him. Up front Kelly seemed to pull out a huge lead in a short time, however unbeknownst to him his sump plug had fallen out and he was dropping oil all over the track. Polley seeing this slowed to avoid being covered in Kelly's oil and also not wanting to risk going off being the first car on the road. Kelly pulled in by the end of the lap but the damage to the track was done and made it very hard for the rest of the field to drive on. So much so that at turn three the cars crawled around the double right hander. Polley now being caught by Byrne, who got by at the final corner but a cut back on the exit saw Polley regain his lead. Behind Murray and Cross had their own battle where Cross looked to have got by exiting the Esses but Murray had that extra bit of grip and held his place.
The leaders now began to catch the tail enders which began to cost them time and together with the oil down it brought the front four together. Cross made his move on his way into the final corner to get by Murray and at the same time Polley ran wide and Byrne got by on the inside but on the exit lost grip and went sideways slightly and let Polley back in front. Cross trying not to hit Byrne spun off and dropped back to fourth.
Murray though got a great run towards turn one and tried to pass both Byrne and Polley but was squeezed out and had to slot back into third. However not one to give up easy Murray outbraked both men ahead of him going into turn three and in a Senna esque move took the lead. Once ahead he began to pull clear, Byrne moved up to second after passing Polley into turn two but by the end of the lap he had halved Murray's lead.
It was shaping up to be a last lap decider as the front two were nose to tail a lap later but a coming together between Jonathan Hollywood and Trevor Delaney resulted in the red flags coming out. Both driver were fine but their cars were in a dangerous position for the race to continue. In the end it was a second win for Murray in Formula Vee and one that was well deserved. Speaking to the winner afterwards he confirmed what everyone watching thought. "It was a very hard race for everyone with the wet conditions and then the oil that was put down. I'm happy to get the win even though its's in the rain again but I'll take it." Along with his win Murray also collected maximum point in the VW Spares Championship.
Another impressive drive came from David O'Loughlin who took second in the VW Spares Championship in his first appearance this year. Owen Kelly again took maximum points in the Motorsport.ie Championship. It is hard to explain how hard the conditions were for all and especially to the newcomers some of whom had never experienced wet conditions before.
Results Race 1
Selco.ie National Championship
1st Tim Murray
2nd Jack Byrne
3rd Dan Polley
VW Spares Championship
1st Tim Murray
2nd David O'Loughlin
3rd Robert Fleming
Motorsport.ie 'Star of Tomorrow' Championship
1st Owen Kellyok
2nd Michael O'Callaghan
3rd Donal Downey
Posted by Barry Cregg