From the season opener to the final meeting of the 2021 Formula Sheane series it hasn't failed to provide drama and close racing. The grids haven't been huge in numbers but the entertainment most certainly has. For the final two rounds of the series the drivers visited the county Down circuit of Kirkistown. Located on the Ards Peninsula the trip although long for the southern drivers, is worth it when you see the views along the coastal road nearing the circuit. Combined with the late spell of warm weather you could be forgiven if one was to think they were driving along the Riviera! Before anyone could let themselves think of a holiday the serious business of winning a championship had to be taken care off first.

It was down to two drivers The first a rookie to the class, the second a relative rookie with not much more seat time in the car over the other. Both though have grown as drivers as the year has progressed. Philip Sheane held a nine point advantage over Derek Roddy going into the penultimate race of the year round eleven. The simplest thing for both men was to win at least one of the races and to put pressure on the other. Easier said than done though as both men have had cruel mechanical luck already this year and indeed for Sheane at this very track back in July where a certain win was taken away by a failing cv joint. 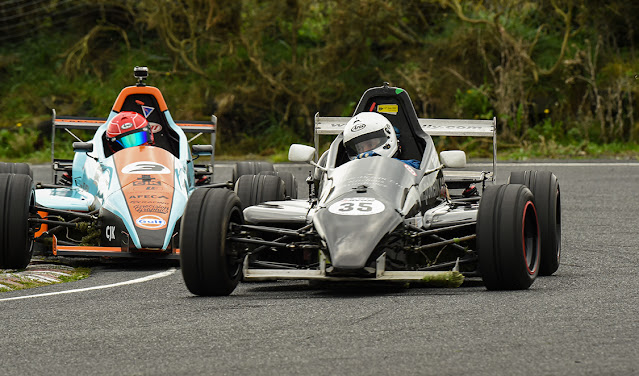 It was at the July meeting where Roddy started his run of front running form by taking the gifted win but more importantly upping his pace which he would carry forward for the rest of the year. His two non starts in the opening round were kicking in now though but all was not lost if he could get another win. Sheane also having to DNF's couldn't afford another one and also need another win to make it much easier for the final race of the year. Things certainly didn't look good for Roddy in qualifying as he never got to do a lap as his driveshaft failed exiting the pits for the session. Sheane however just missed out on pole by 0.091 of a second to Richard Kearney who again showed his dry weather pace. 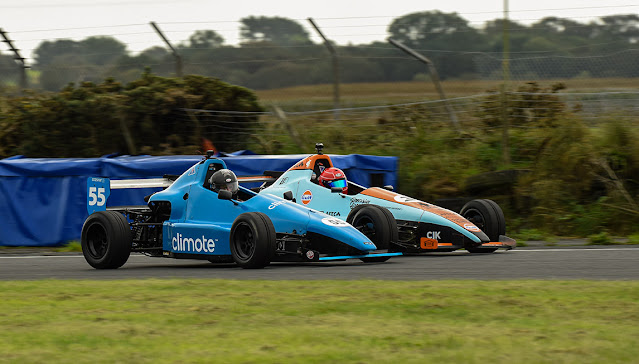 Another out to prove a point to the field that he hasn't gone away and even though he has no chance championship wise he will want to take a victory or two before the season is out and possibly get third overall. It would also be a fight for the scholarship class title between Richie Adams and Chris Dunne with both men eyeing up the class prize. With Kearney on pole and being one of the best starters on the grid it be interesting to see if Sheane would get into a battle from the off or would he follow the Carlow man for the race? That was answered from the off as unusually for Kearney he got a terrible start and found himself down to fifth by the end of lap one not helped by outbraking himself into turn two and taking to the grass! 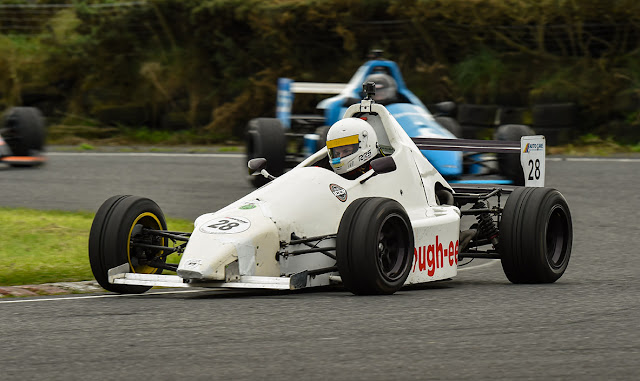 Sheane got a good start but Roddy had a flyer, so much so he thought he had jumped the start. Either way he was in the lead by the end of lap one from the back of the grid! Now the battle was one as Sheane followed suit and was happy to sit there for a couple of laps. Roddy didn't look as comfortable as he usually does up front but held Sheane at bay defending well into the final hairpin. Kearney however woke up and reeled in the two championship contenders easily. However catching is one thing getting by is another another. By the halfway stage he still was in third. It was at this stage Sheane made his move on Roddy getting a better run through the chicane gave him the speed down the straight to pass at the hairpin.
Once ahead he knew he could control the pace and this he did by opening a small gap by the end of the following lap. He was then helped by Kearney getting by Roddy at the hairpin also. The following laps were magic for the onlookers as these two swapped places on each of the following four laps. It look as though Roddy got sucked into a battle that he didn't need and it could be argued that if he had sat behind Kearney, he would have been brought back to Sheane and maybe then he could get by at a later stage. Easy to say watching from the fence but it was still great to see how hard both drivers were pushing. Sadly for Roddy he pushed too hard going into the hairpin with two laps to go and ran wide and took to the grass. Luckily he was far enough ahead of Brendan Carr to remain in third.
Unfortunate but lucky not to damage the car but his race for second was over and with it more dropped points. Sheane though was delighted to take the win and ease the pressure somewhat before the final round. Kearney took second but rued his bad start and his chance at victory. It would mean Sheane had a sizeable lead of fifteen points over Roddy going into the final round. Behind all this Paul McLoughlin who was out for the second time this year looked good in fourth until he retired on lap three with a mechanical problem. 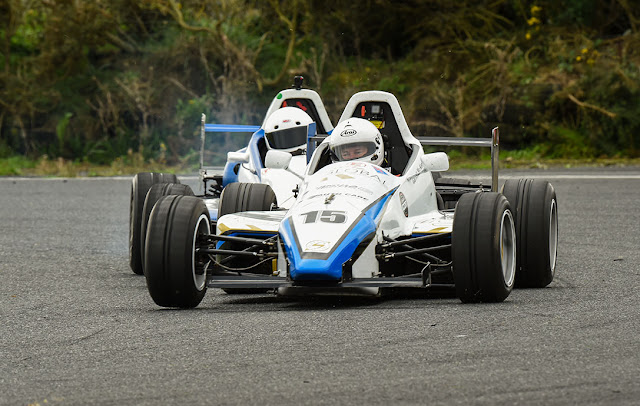 In the scholarship class Richie Adams, Garrett McKenna and Chris Dunne swapped places in the opening laps until a coming together at the hairpin between McKenna and Dunne resulted in Dunne running over his own nosecone and front wing. This let Adams off the hook to take the win over McKenna with Dunne managing to come home in third.

Another race where caution was thrown against the wind, but it was still dragging it to the grand finale. Could Roddy take a win with Sheane not finishing? It was Sheane's to lose but he had one hand firmly on the trophy but anything could still happen.