In its 20th season it is fitting that this years championship went to a Sheane. The class and car born from David Sheane as a step up from Formula Vee at the beginning of the new millenium. For the final race it was quiet simple for the two championship contenders.

Philip Sheane who had one hand on the trophy after winning the penultimate race only had to finish in the top five if Derek Roddy won. Roddy knowing he only had a slim chance for the big prize was still upbeat and was going out to enjoy his race. " I'd need Phillip to load the car on to the trailer now for a chance to win the title now." He said laughing just before he took to the grid. In saying that a sure victory was taken away from Sheane at the same venue back in July and if a similar thing was to happen it would give Roddy the title cruel as it may be.

Beyond these two there were others out to make up for lost time and ground and to set right the bad runs had earlier in the year. Paul McLoughlin made a much welcomed reappearance and showed good pace in the previous race. Brendan Carr finally got his arm working again to take the wheel of the double race winning car used by Enda O'Connor in rounds 3&4 at July's Mondello meeting. Rookies Chris Dunne and Richie Adams were also out to settle the Scholarship class.

Richard Kearney also wanted to end his bad year with at least one more win stating that he would win before taking to the track. Some prayed for him to win, saying " It will be a long winter if he doesn't!". So still all to play for in this final race of the year. A quick year it has been even though the late start due to the pandemic. Kearney and Sheane lined up on the front row and it was Kearney who got the best start to lead the field through Debtor's and into turn two. 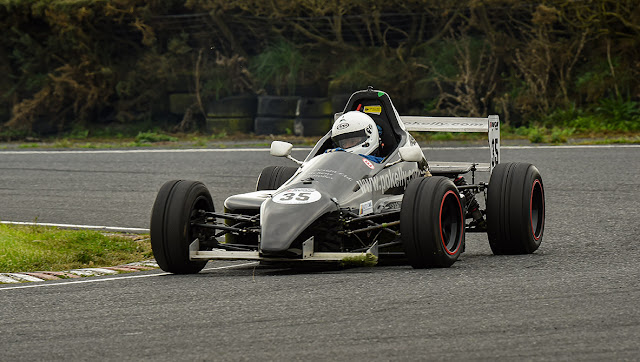 Paul McLoughlin also made a great start and pulled off a great maneuver around the outside of Sheane to take second place. A slight touch of wheels on the exit may have upset Sheane's rythm for turn three, but his reflexes weren't as he had to move quickly to the left as Roddy was on a charge past with no signs of easing for the corner. In fact he pushed Sheane wide causing him to drop to sixth. By the end of the second lap Kearney had already opened up a gap to Paul McLoughlin as he had Roddy breathing down his neck. Sheane was making his way through the field passing Adams and Carr a couple of laps later. Roddy mad his move into second but it would be hard to catch Kearney ahead especially as he now had broken the toe from the men behind him. Sheane was now in a safe fourth place with no pressure. He couldn't catch those at the front and he had gapped those behind. All he had to do was reel off the laps and the championship was his. Roddy tried hard to catch Kearney but the Carlow man was true to his word and wanted the win. The placings became stagnant with the gaps staying much the same throughout the field from the halfway mark. It would have been nice to see a battle up front for the title but Sheane used his head and stayed out of trouble after that near miss on the opening lap. In the end

Kearney cruised to another win and deservedly so as he was the quickest man all day taking fastest lap with a 1,01.708 second lap. Roddy did his best but it was always going to be a tall order and finishing again on the podium added to his consistency for the year. Paul McLoughlin came home in a fantastic third place and if only he had been out all year the championship could have been even closer. Hopefully he makes a return full time to the grid next year. Brendan Carr had a great run just finishing behind Sheane.

In the Scholarship class Chis Dunne may not have had the pace in race two to rival Richie Adams but after nearly loosing it all in the previous race he was happy to sit tight and bring the car home to win the class. A brilliant result for the all newcomer to motor racing.  So that was a wrap for the 2021 season which saw a resurrection of the class with four newcomers coming into joining the current runners. Hopefully the interest has been sparked by other to come back out and join them on the grid in 2022!