For round three of the Airportcar.ie Formula Sheane championship drivers made their way to Bishopscourt Racing Circuit north of the border in county Down. The welcomed change of venue is only used once a year and this year is the first time the class has be back since before the Covid outbreak. The 1.830 mile track is fast and flowing with some quick chicanes and tricky hairpins.

Weather was good for  qualifying where Richard Kearney wanted to make amends for his DNF in round two last time out at Mondello. With Philip Sheane not taking part this weekend it would be hard to see if Kearney would be pushed hard at one of his favourite tracks. Qualifying times would prove that the others had much time to find. Kearney claimed pole position by a massive 3.209 seconds! Richie Adams was the closest to him which shows he is carrying his good form on from Mondello Park last month. It has to be said the problems of sourcing tyres due to manufacturing problems has left drivers with old rubber which they also have to make last two races. So qualifying times did not tell the full story.

As the lights went out Kearney got the best start and lead the field as they made the long run down to the first left hand bend Brock's. Richie Adams got so much wheelspin off the line he dropped to last by the first turn. Mark Keenan got a flyer too and and made up several places off the line and by the end of lap one he was up to second and chasing down Kearney. Chris Dunne held third ahead of Garrett McKenna, and Mike Dermody. Poor Tom Foley in his first race this year ended with mechanical failure on the warm-up lap. Kearney who had a DNF in the previous round at Mondello was out to make amends this time and opened up a sizable lead by the end of lap two. Keenan hung on though and left Dunne behind in third. His speed has carried on from the opening round but try as he might just could close the gap to Kearney.

By mid race distance the tyre issue all drivers were having came into play with times dropping off and some clearly lacking grip. That said Kearney was driving superb not missing an apex an clearly had his car setup well. Adams had an eventful race, making his way back up to fourth but dropped back to sixth as his car refused to play ball with him and handling problems cost him lots of time. McKenna also had a busy race having a steady run in fourth but at the half way mark he was back to seventh but got himself back up to fourth again by the flag. Kearney reeled off the final laps to take a comfortable win. Keenan continued his good form this season by taking second with Chris Dunne taking third.

For race two again Kearney made the best start like in race one and headed the field into turn one. Garrett McKenna got a great start and moved into second ahead of Keenan, not what the Meath publican wanted as he knew Kearney would get away. McKenna's joy was short lived as he spun at the chicane letting not only Kennan through but also the whole field although he did get back up to sixth by the end of the race. Keenan set about closing down Kearney who again was in his groove and setting fastest times each lap. Tom Foley made repairs to his car and had a great run in fourth place keep more experienced drivers like Richie Adams and Garrett McKenna behind him.

Bishopscourt has been a happy hunting ground for the Leighlindbridge man, who was on course to make it four wins in a row at the county Down track. He got his car setup right and it showed easily keeping his corner speed up through faster sections of the track over his rivals. Chris Dunne had a lonely race in third in his freshly painted car for this round. The race petered out from mid distance with the gaps staying the same. Kearney again reeled off the laps and took an easy win to make it a clean sweep with Pole position, two wins and two fastest laps. 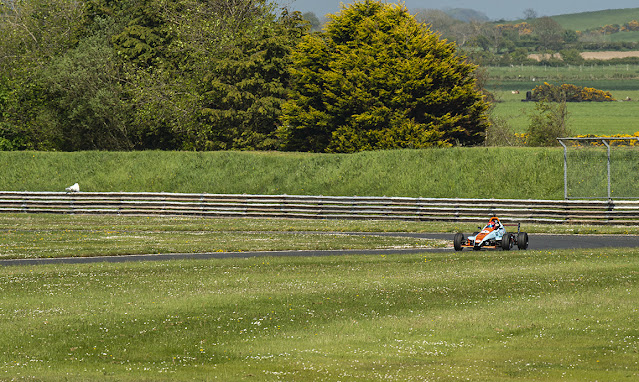 Mark Keenan came home in second to take home a solid points haul. Chris Dunne did the same with his second podium of the weekend. Speaking with the victor after the race he was in expected buoyant form,

" I'm really happy with winning the two races, the car was on point all weekend and I love the circuit. It has been good to me and that's four in a row now, I'm Over the moon to be honest."